With her clear skin, enviable figure and thick, dark hair, Pamela Jacobs looks every inch the yummy mummy. But while she might look like someone in her late twenties or early thirties, Mrs Jacobs is 52 – and has a 21-year-old son. So young does she appear, she has been offered student rail fares and is told she must be lying when she reveals her real age.

‘Men do comment on my looks and say things like “I don’t believe you” or “You must be lying”,’ she says. ‘I always say, what woman would actually add years on?’

Mrs Jacobs, who says her mother and siblings also look younger than they really are, attributes her youthful looks to good genes, a healthy diet, lots of exercise – and plenty of coconut oil.

She also has a weekly sauna and steam, exfoliates her face every other day and never leaves the house without sunscreen – she like to use Greek brand Korres because it’s ‘natural’.

But unlike Stephanie Arnott, the 58-year-old who hit headlines recently after claiming to look 35 and saying her beauty ‘reduces men to tears’, Mrs Jacobs says she doesn’t play up to her looks.

‘I’m not sure I would clean a car in a bikini [as Mrs Arnott claimed to do] – there are some limits when you have a 21-year-old son,’ she says. ‘I do still wear little denim shorts in the garden though.’

Much to her son’s horror, she also gets attention from younger men – and embarrassingly, has been mistaken for his girlfriend in the past.

‘A while ago someone my son knows thought I was his girlfriend,’ she chuckles. ‘And some people I know have thought the same in reverse.’

But Marley need not worry about her dating any of his friends because Mrs Jacobs, who is currently single after marrying and divorcing in her twenties, says she has no intention of dating a younger man. ‘It’s flattering but I prefer men of a similar age to me,’ she explains, pointing out that a 21-year-old son ‘puts that [dating a twenty-something] into perspective’.

Nicknamed Pharrell by family members after the enduringly youthful singer, Mrs Jacobs says the odd embarrassing situation notwithstanding, there are no real downsides to looking younger.

‘I can’t remember the last time I was ID’d but a few years ago I was buying ticket to London and the cashier asked if I had my student rail card so I said I didn’t have one.

‘He then asked if I wanted to apply for one so I had to tell him that I wasn’t a student and what my real age is. He went a bit red.’ 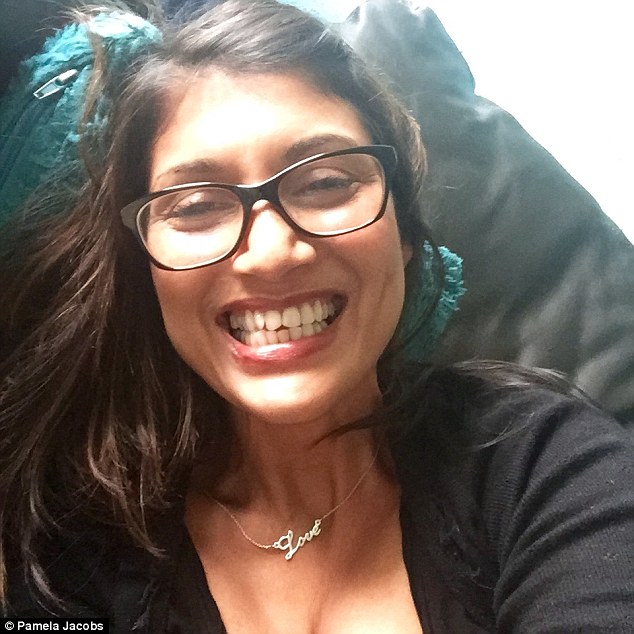 Another incident came during a health screening two years ago when a nurse refused to believe that she was 50 until seeing her medical notes.

‘She said she was amazed at how young I looked – and also that I still had a waist,’ she remembers.
Despite her youthful looks, Mrs Jacobs, who turns 53 next month, says she is starting to notice some signs of ageing such as being more tired than before.

Nevertheless, she continues to do a weekly body conditioning class and eats a healthy diet packed with leafy greens and coconut oil – crediting the latter with her glowing complexion.

‘I’m a big coconut oil lover,’ she explains. ‘My mother used it on our hair and skin when we were younger and I’ve carried on.

‘I use Biona Organic Coconut Oil for cooking, in coffee, for removing make-up, for hair treatments and on my body twice a day as a moisturiser.’

She avoids wheat products such as bread and pasta because of the bloating they cause and doesn’t eat fruit because of the high sugar content but says everything else is allowed.

‘I follow the 80/20 rule,’ she reveals. ’80 per cent eating well and 20 per cent sneaking in the odd pudding, a little alcohol or organic dark chocolate.’

Other tips include avoiding chemicals wherever possible and using pink Himalayan salt in the bath once a week to help banish toxins.

Regular body brushing – and lavish application of coconut oil – keeps her skin soft, as does an overnight mask once a week.

She has also begun investing in better quality cosmetics which, she says, work better and last for longer.

‘I use a little Laura Mercier Tinted Moisturiser in Golden which gives a dewy effect and By Terry Terribly Densiliss concealer because contains an eye treatment,’ she explains.

‘Then for lips, I like Stila lip gloss in Cranberry, Nars lip glosses and also Lipstick Queen’s coral lipstick. Putting it all on takes about five minutes.’

Ultimately, Mrs Jacobs says looking young is all about outlook and says nothing beats a big smile when it comes to knocking 10 years off.

‘I think the secret of eternal youth is to smile every day,’ she says. ‘The best thing about looking young is that it makes me feel good and gives me confidence.

‘I’m not perfect and have flaws like everyone else but I am grateful for what I do have.’

Want To Look as Young as Pamela? Here’s How She Does It:

Diet: Pamela, who is of South Asian origin, eats a super-healthy diet based largely on vegetables and topped up with good proteins such as salmon.

Many of the dishes she makes are Asian and are spiced up with ginger, cumin and turmeric, among others, which she says act a bit like food supplements in terms of the health benefits.

Breakfast is usually an organic boiled egg served with gluten-free toast or organic oatcakes and coconut yoghurt with fresh berries and nuts.

To finish off the meal, she has a glass of coconut water with added liquid iron, which she says is key for stopping her iron levels plummeting as she ages.

Lunch comes in the shape of a salad prepared at home in the morning and usually contains a mixture of organic spinach, kale, rocket, cucumber, tomatoes, olives, red peppers, advocado, beansprouts and sauerkraut [pickled cabbage].

Fresh basil and coriander add flavour while pumpkin and sunflower seeds add crunch. ‘For protein I’ll add some Arbroath salmon, eggs or chicken and dress the salad with organic olive oil and lemon juice,’ she adds. ‘I also add cayenne pepper and lots of black pepper.’

Dinner is equally healthy and usually consists of a portion of organic chicken, oily fish or a lamb steak served with a ‘mountain of vegetables’ – broccoli and courgettes are favourites.

She also eats a daily handful of almonds, snacks on celery and houmus and limits her coffee intake to one a day. Most of what she eats is organic and she drinks water throughout the day, usually flavoured with a squeeze of fresh lime juice.

Exercise: Pamela does a body conditioning class once a week and follows that with a fitness yoga session immediately afterwards.

While at the gym, she uses the sauna and steam room and does a whole body exfoliation. She also uses the time to use a hair mask – she likes Aveda’s Damage Remedy.

‘I’ll go in the sauna for 10 minutes then have a freezing cold shower until the water stops,’ she adds.
‘I love it – it makes me so feel invigorated and I’m convinced it has helped to tone my skin. Then I will have 10 minutes in the steam and repeat the cold shower.’

Skincare: Pamela loves Aveda’s all-natural Damage Remedy range and alternates between that and the Inviati brand to keep her hair soft.

She protects her locks with Aveda’s Brilliant Hair protector and gets rid of flyaways with the help of Oribe Moisturising Cream and Moroccan Oil.

Cleansing is done either with Liz Earle Cleanse and Polish (‘It’s reasonably priced and effective’) or coconut oil.

To keep her skin in good shape, she uses Origins A Perfect World moisturiser which comes with SPF25 – a skincare essential according to Pamela.

Body Care: Pamela moisturises her body with coconut oil twice a day and says it keeps her skin ‘incredibly soft and nourished’.

She also uses a body brush before showering and prefers paraben-free shower gel brands such as Sai Sei or Faith in Nature.

Once a week, she detoxes by soaking in a bath topped up with pink Himalayan salt crystals and scrubs her feet each day while showering.

Remember, there are 4 additional ways to save on iHerb!: